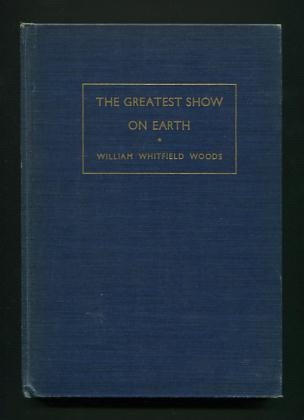 The Greatest Show on Earth: A Play in Four Acts

(no dust jacket) [light wear to extremities, a little spotting/soiling to top page edges; attractive vintage bookplate (Mary and Seymour Korman) on ffep]. (photo frontispiece portrait of author) Very scarce anti-war drama, in which the protagonist, a World War I veteran whose younger brother was killed in combat and who becomes a isolationist/pacifist as a result, goes into politics, apparently for the sole purpose of exposing how America had been conned into the conflict. In a fiery concluding speech at a national political convention (no party named, please!), he rails on about how "it wasn't really our war. We were lied into it. And the common people of Europe might as well know that it wasn't their war. It belonged to the diplomats and foreign offices, to the Governments and crowns of Europe .... these tradition-sotted vermin and their whole rotten program of international alliances, secret understandings, political concessions and territorial aggrandizement." Prefacing this final triumphant speech, Act IV consists almost entirely of a re-enactment of conversations (and machinations) among Woodrow Wilson, Georges Clemenceau, David Lloyd George, and several Italian diplomats at the 1919 Peace Conference in Paris. In a somewhat Brechtian transitional moment between this historical interlude and the concluding action of the play proper, the protagonist states to his listeners (and thus to the audience/reader) that this scene represents "the things I saw and heard as an aide at the Peace Conference." However -- and contrary to expectations, I should say -- it would appear that this is not an "I-wuz-there" dramatization: Mr. Woods, at least according to his N.Y. Times obituary, spent the war years in New York as a newspaperman, and in 1918 joined the staff of the Institute of American Meat Packers in Chicago, eventually becoming its president. There's no indication that he ever went anywhere near Paris -- although he did put in a brief pre-war stint as a college instructor at Texas A&M, so it's conceivable he might have set foot in Paris, Texas, at some point. He died, by the way, in January 1939; hence this play, his only published work, can fairly be characterized as a "keep-us-out-of-war" plea from beyond the grave. It might also be noted, for the bibliographically-attentive among you, that the publisher of this book was not the New York-based Brentano's (which ceased to operate as a publisher in about 1933), but rather Brentano's Bookstores, Inc. of Chicago ("Booksellers to the World").

Title: The Greatest Show on Earth: A Play in Four Acts

The Greatest Show on Earth: A Play in Four Acts