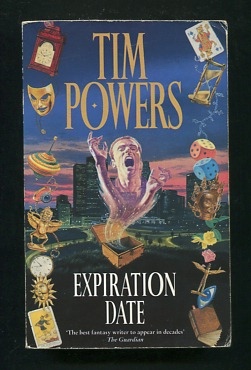 [covers edgeworn all around, corners somewhat dog-eared; book still square, though, and no creases in spine]. Mass Market PB INSCRIBED and SIGNED (upside-down) by the author on the title page: "For ----: One of the dozen or so people who have read the real text of ' Epitaph in Rust'* Cheers, Tim Powers. *P.S.--This is better." The true first edition, issued as a paperback original in England almost a year prior to its first American (and hardcover) appearance. The author's explanation of how this came about: "The manuscript was sent to both HarperCollins in the UK and Avon Books in the US. (Avon had originally bought the book, though we later bought it back and sold it to Tor.) The British publisher simply went to press with it, but the Avon editor asked me to do re-writes -- mainly add a couple of scenes, which were improvements, and I took the opportunity to change some things on my own, too. So basically the British edition is a first draft. The American edition is the 'preferred text.' In fact, I made a few further changes for the American paperback, so THAT'S the preferred text!" Signed by Author