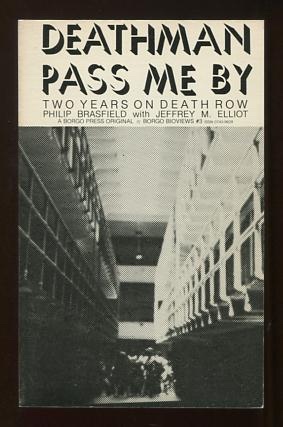 Deathman Pass Me By: Two Years on Death Row

[a tight, clean, unread copy, with just a trace of edgewear]. (Borgo Bioviews, No. 3) Series Trade PB (B&W photographs) First-person narrative by a man convicted of first degree murder and kidnapping in Wichita County, Texas, in 1978, and sentenced to death by lethal injection -- despite no hard evidence (and what evidence there was containing obvious irregularities), court-appointed attorneys who mounted no defense, witnesses who either refused to testify or could not be positive in their identification, etc. He spent two years on Death Row before his conviction was overturned, during which time he found God and became a published poet and an outspoken advocate for the abolition of the death penalty. (He was subsequently re-tried and again convicted-- apparently on the same circumstantial evidence--and remains in prison today, where he continues to write on prison and death penalty issues for various publications, and to profess his innocence. I suppose he should be thankful that his first conviction didn't come during George W.'s term as governor.)

Title: Deathman Pass Me By: Two Years on Death Row

Deathman Pass Me By: Two Years on Death Row