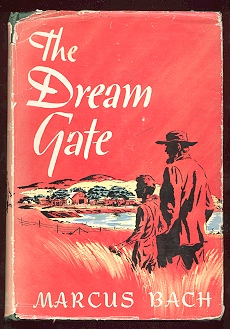 (jacket is Fair) [book nice and solid, minimal shelfwear, extensive gift inscription (from a group) covering most of ffep; jacket worn at edges/corners, spine faded, various small tears and some paper loss at top of spine]. Uncommon novel set in Old Portage Colony, a communistic community in South Dakota, dealing with their attempts to relate to the "outside world." According to the jacket blurb, the author " is one of the few 'outsiders' who have been allowed to penetrate the isolated Hutterite communes, eight of which are in South Dakota, two in Montana and nearly thirty in Canada. He became interested in them while doing research in attempts at communistic and mutualistic living in the United States. One hundred forty-nine such experiments had failed. Only the Hutterians, who first came to this country in 1874, remains, have kept their fences strong and taut against the world. He found their 6,000 followers--about 200 to a commune--living without personal possessions, luxuries, amusements, working unitedly 'for the good of all rather than for the pleasure of one."