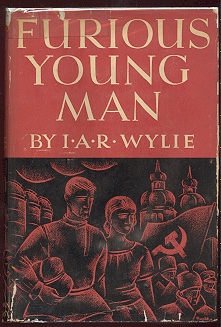 [solid copy, with some mild dampstaining to exterior cloth, interior mostly unaffected except for an occasional light stain; jacket well-worn at edge/corners, wrinkled, soiled, dampstaining visible on rear panel, numerous chips and small edge-tears, tape repair along top edge, a little paper loss -- but for all that, not too bad-looking in a new Brodart cover]. A Londoner is seized with the spirit of radicalism; at a communist rally, he gets into a scrape with the authories and, with the help of a Russian compatriot, emigrates to the Soviet Union and joins the ranks of the workers. "Because [the author] is as familiar with present-day conditions in Russia as with life in England, the background for [the book] is entirely authentic. Her picture of Soviet life is realistic and unforgettable." (According to the jacket notes, she had recently published a series of articles in the Saturday Evening Post about her travels in Russia.) One of this prolific novelist's scarcer works, especially in the jacket, which depicts a somewhat expressionistic scene of Soviet workers on the march.