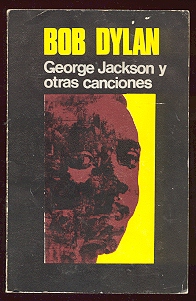 By: Dylan, Bob [selected and translated by Antonio Resines]

[moderate edgewear, some creasing/rubbing to covers]. Trade PB (No. 27 in the series "Coleccion Visor de Poesia"). Contains the lyrics in both English and Spanish for 26 Dylan songs, many of overtly political content, and including (if my research is correct) a few songs that were written but never recorded (or at least not issued commercially) by Dylan ("The Death of Emmett Till"; "Long Ago, Far Away") or were only released many years later on his "Bootleg Series" albums ("Only a Hobo"; "Walls of Red Wing"). The introduction is in Spanish only, and seems to be a discussion of the political content of Dylan's songs and the general political climate in the U.S.; among the subjects referenced are the Chicago Seven, Kent State, Attica, Sacco and Vanzetti, and Angela Davis. Includes a 3-page discography.