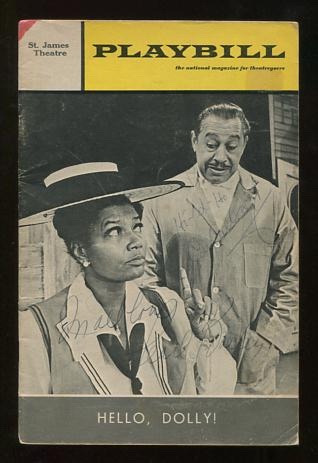 By: {Pearl Bailey and Cab Calloway}

[a bit of edgewear, small red stain at upper left corner of front cover, small shadow from removed price-sticker on front cover, short diagonal creasing at bottom right corner of front cover]. (B&W photographs, ads) Program for the all-black-cast version of the smash hit musical, which began as a touring company in 1967 and was so successful that producer David Merrick brought it to Broadway, with Pearl Bailey taking her place among the half-dozen (otherwise white) performers who had essayed the role of Dolly Levi after original star Carol Channing left the show, which had opened in 1964 and ... View more info