Let Freedom Ring: A Play in Three Acts; based on the Grace Lumpkin novel "To Make My Bread"

(no dust jacket) [nice clean book, with just light wear to extremities]. (B&W photographs) Proletarian drama, adapted from Grace Lumpkin's 1932 novel about the Gastonia strike. Don West, in his introduction (originally published as a review of the play in The Daily Worker), states: "With keen and discriminating understanding, with sensitive and sympathetic strokes, Albert Bein paints this picture of an awakening South, of a youthful and gigantic proletariat testing its strength, of the unity of black and white workers being welded over prejudice and lies by a common interest. ... It is on... View more info 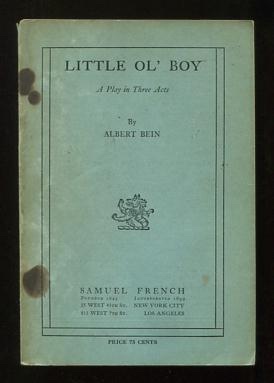 [moderately worn copy, two unsightly stains at left side of front cover (bleed-through from rusty staples binding the text block), some discoloration to spine; no markings in text]. Drama set in a boys' reformatory in the American Southwest. According to the copyright page, the play was first copyrighted in 1929 under the title of "Road Out of Hell," and was "revised and rewritten [in] 1933." The Foreword by Barrett H. Clark gives a good deal of biographical information on the playwright (described as a "short, stocky, lame young man"), who had himself served a term ... View more info