Author:Capek, Josef and Karel (adapted and arranged for the American stage by Owen Davis) 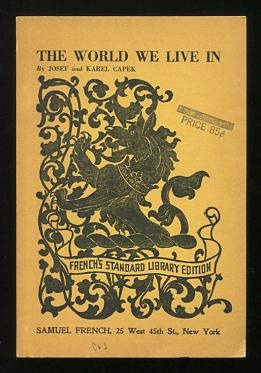 By: Capek, Josef and Karel (adapted and arranged for the American stage by Owen Davis)

[minimal wear, a couple of tiny ink marks (initials?) at bottom of front cover]. (scene design diagram) A satirical morality play, something along the lines of "Animal Farm" (but with insects), co-written (with his brother) by the Czech playwright whose "R.U.R." had opened in New York just a few weeks earlier. (Josef Capek was primarily a painter, but also collaborated with his brother Karel on several of the latter's early plays; it was supposedly he who coined the word "robot.") Gilbert Seldes, reviewing the 1922 Broadway production for The New York Times, wasn't t...
View More...