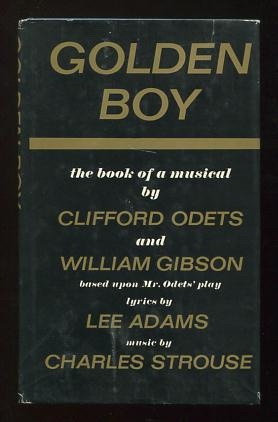 Golden Boy; the book of a musical...

By: Odets, Clifford, and William Gibson

[the teensiest bit of shelfwear to book; jacket shows some surface wear, 1-inch split (with a little paper loss) at top rear foldover, very slight insect-nibbling at bottom edges of flaps, slight wrinkling at spine ends]. (B&W photographs) The book of the musical by Odets and Gibson, based upon the former's play; lyrics by Lee Adams, music (not included in this publication) by Charles Strouse. The original Broadway production, with Sammy Davis Jr. in the lead and directed by Arthur Penn, opened in October 1964 and ran for 568 performances. Includes a lengthy preface by Gibson, explaining how...
View More...