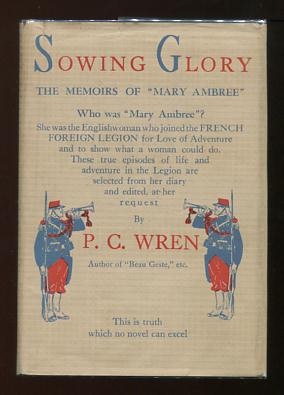 [nice clean copy, no significant wear, just a touch of foxing to the fore-edge; jacket a bit darkened along spine, with a few tiny edge-nicks]. Pseudonymous memoir, based on the diary of a woman who purportedly served a five-year hitch in the French Foreign Legion (after having been an ambulance driver during World War I), as "edited and retold" by a guy who did as much to romanticize the F.F.L. as anyone, primarily through his popular "Beau" novels ("Beau Geste," "Beau Sabreur" and "Beau Ideal"), all of which were also filmed. Wren's claims to have ser...
View More...