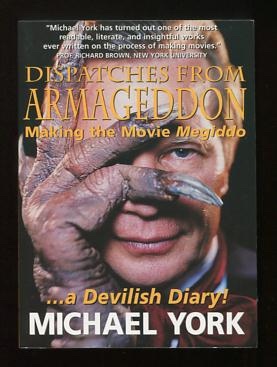 [slight bump/bend to top corner of back cover, also affecting the top corners of the last dozen or so pages; no other significant wear]. Trade PB (B&W photographs) INSCRIBED "For ____ / Wishing you a / diabolically good / read! / Sincerely," and SIGNED by the author on the half-title page. A "making of" book about a movie (full title MEGIDDO: THE OMEGA CODE 2) that came and went almost without a trace, except I guess you could call this book a trace. (As you might deduce from the title, it was a sequel to the 1999 film THE OMEGA CODE, which also starred York. An IMDb commen...
View More...